Gabriel of Darfur United celebrates the birth of his daughter from Iraq!

We just learned that long-time VSee users Gabriel and Katie-Jay Stauring used VSee to connect from different sides of the globe while Katie-Jay was in labor with their first child!

Gabriel and Katie-Jay run i-ACT, a grassroots organization that combines innovative technology with personal connection to help victims of mass atrocities and crimes against humanity. Their crucial work has them constantly travelling around the world. Last week Katie-Jay was in Los Angeles and Gabriel was in Iraqi Kurdistan with Darfur United – an all-refugee soccer team made up of Darfuri refugees living in Eastern Chad. They had hoped that Gabriel would make it back in time, but their little bundle of joy couldn’t wait and Katie-Jay went into labor 2 days before Gabriel was scheduled to fly back.

They have been using VSee since 2007, so Katie-Jay naturally brought a laptop to the hospital to share little Leila Paz’s first moments with Daddy. When asked about the special VSee call, Gabriel said, “The internet is really bad here [Iraqi Kurdistan], but I was still able to video in right after Leila was born and hang out with them for more than an hour.”

They had not planned on Gabriel being out of the country so close to the delivery date, but they had no control over the timing of the 2012 VIVA World Cup that Darfur United was competing in. Darfur United is an ambitious project they have been working on with i-ACT. Gabriel, “With Darfur United, we saw the opportunity to create awareness using a sport that is loved worldwide,” and “to give the refugees something positive in their lives and something they can be proud of and call their own,”

To learn more about Darfur United and to help support the team (they still need to raise funds to finish paying for this trip) visit Darfur United.

We are thrilled that VSee helped a very special family stay connected during such an important time, and wish them all the best with their new beautiful baby. 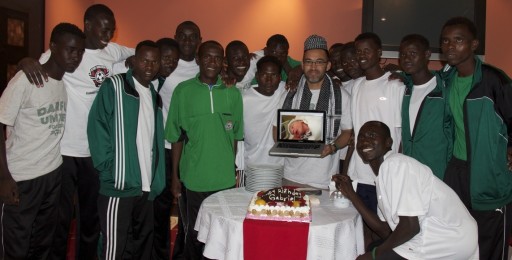 Gabriel with Darfur United celebrating his Birthday and the birth of Leila Paz from Iraq!