Getting set for World Refugee Day

VSee and UN staff and volunteers are in Washington, DC, Mountain View, California, and Chad, preparing for World Refugee Day this Saturday, June 20, when they will use VSee over a satellite link to provide live video from the Djabal refugee camp in the eastern part of Chad. Yuen-Lin Tan, a humanitarian activist and VSee technologist, shown below preparing the equipment to be sent to Africa, demonstrated the feasiblity of the project in a field test in April.

UNHCR goodwill ambassador Angelina Jolie will use VSee to speak with Chad refugees on June 18th in an event hosted by CNN journalist Anderson Cooper in Washington D.C.

Then on Saturday, the World Refugee Day site will carry a live video feed of conversations between the US and Chad. 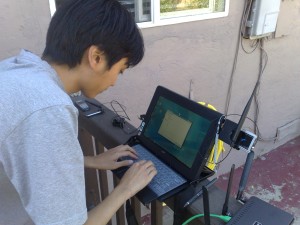