How Critical Is Instant Messaging When Making Video Calls? 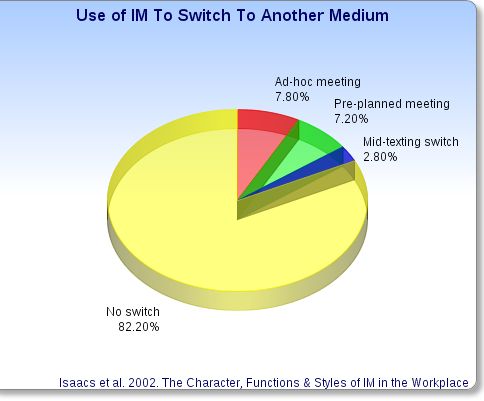 At last Friday’s lunch meeting, what started off as a walk-through of the VSee development road map, highlighting recent improvements and anticipating future features and functionality, quickly degenerated into passionate debate about whether VSee needed to include instant messaging in it’s next major release.

I don’t think it was a question of whether or not we want to have this function, but rather  a question ofhow big a priority it should be at this point in time, and whether it’s worth the time and manpower to implement it now.  Maybe we should focus all our resources on bigger and better things like rolling out the Mac OS X version or developing iPad and Android versions.

The Arguments
In one corner, we had sales saying that it is a key selling point if we want to extend the client base and improve user adoption.  The argument goes that checking someone’s availability before a video call is a natural part of the call cycle and should be allowed when making a VSee call.  Including this feature would shorten and make the call cycle more convenient.

In the other corner, we have usability saying that it doesn’t add enough value to the product itself for the time and effort it would take to implement.  People who choose VSee get it for its audio and video capabilities, not for its Instant Messaging (IM), so it’s more important to focus on delivering a great, easy-to-use AV experience.  However, usability did concede that it would be a good idea to include the ability to leave a reason for declining a video call instead of the current “black hole” response.

Within VSee itself, having that instant messaging feature isn’t crucial since we use gTalk and can use that to text-check someone’s availability before escalating to a full-on VSee call.  Most of us intuitively use it to avoid the whole intrusiveness issue and interrupting someone in the middle of doing something. 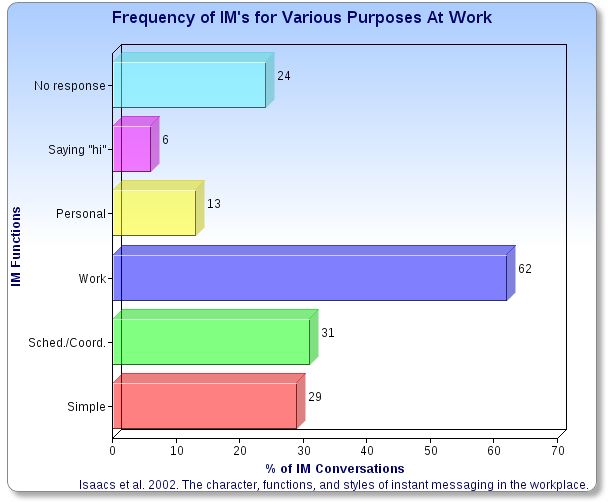 Professors Garrett and Danziger did a national phone survey to investigate whether people who used text-based IM were more productive than those who didn’t.  They found that IM actually reduces workflow disruptions.  Since it is usually acceptable to ignore IM messages, and it’s easy to get a quick measure of someone’s availability, (whether through a visible indicator or a quick response), people are able to time interruptions and prioritize their interactions better.  They can easily engage in “low-intensity collaboration” and ask quick questions throughout the day without disrupting someone or being disrupted by someone.  They note that this is not the case for voice and video messaging.  Sixty percent of voice- and video-enabled IM users report that they are regularly interrupted, compared to 48% of non-users.

In Shaw, Scheufele and Catalano’s field experiment comparing workplace communication before and after the installation of an IM service in a Fortune 500 company, workers reported a significant reduction in voice mails and the need to play phone tag in their day-to-day interactions,  because they were able to check their contact’s availability using IM.  Interestingly, people did not report significant change in their communications done face-to-face, over the (landline) phone, or through e-mail, although they perceived a drop in fax, snail-mail, and cell phone use.

Moral of the story:

What do you think?  How much value does Instant Messaging give VSee?  Should it be a VSee priority at this point? (Note:  VSee does have text-chat functionality once you’re in a video call meeting.)