Teleworking Without Power, Courtesy of Irene 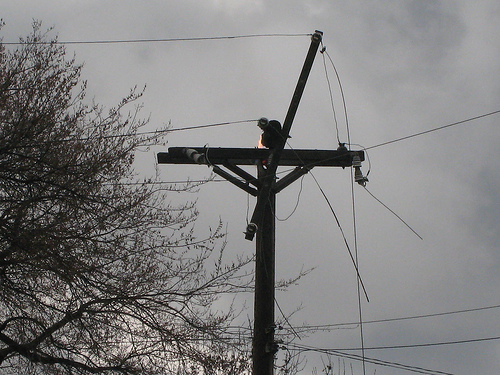 It’s been a week of tussling with Mother Nature out here in Virginia.  There was the 5.8 earthquake on Tuesday in which telecommuters fared well and the Washington Monument not so well.  It was followed by the remnants of Hurricane Irene which unfortunately did not leave telecommuters quite so unscathed.  Power was knocked out all up and down the East Coast, during which I realize how completely helpless I am without electricity.  The worst part is not being able to get any information:  I had no Internet access, no television, no radio, and very limited phone use.  (We were keeping our cell phones off for emergencies since we couldn’t recharge them.  Oh why didn’t we get a landline?)  Then there was the issue of food: no refrigeration, no microwave, no stove, and no grill.  The least of our problems was not having light.  I mean the sun will come out tomorrow, right?  I’m just grateful that water didn’t get cut off -that would have been truly catastrophic-although we are being asked to conserve water since primary power for water purification isn’t back, yet.

As the blackout continued well into Sunday, I began to wonder about my options as a remote worker.  I could:

None of the options sounded too appealing to me, and thankfully I didn’t have to choose any of them since electricity was restored to our area Sunday evening, so at least nearby stores are up and running even if our house electricity isn’t.  Moral of the story:  Live in California where nature rarely chooses to affect your lifestyle.