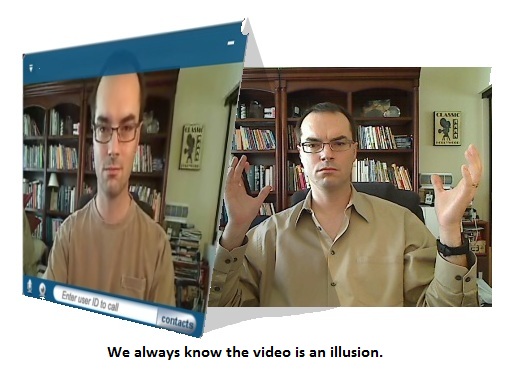 According to a recent post over at Network World (Teleflirtation: The latest hot way to hook up), Cisco learned things in a recent study that anyone doing video collaboration that isn’t telepresence already knows:  Trying to create the illusion that everyone is in the same room doesn’t work.

Before I go too far, you’re probably wondering about the title of the article I’m referencing, so I’ll get that out of the way.  There was all of two paragraphs at the beginning of the article mentioning that people will use IM to send each other messages unrelated to what they’re verbally talking about during a video call.  (I almost wonder if the people at Cisco even use video conferencing?  Here, you can usually see/hear people typing away during staff meetings…)  The studies were done with NYU students and so the IM chatting tended to be flirtatious when the genders were mixed.  That was it regarding “teleflirtation”.  Students flirting with other students.  Shocking!

Back to the discussion of telepresence, and why it seems unnecessary…

The basic premise of telepresence is to make every conference room that is communicating with other conference rooms look completely identical, down to the lighting, colors, desks, etc.  All monitors are large enough to project life-sized images around the desks to attempt the illusion that meeting participants are in the same room together.

However, in this study everyone asked each other where they were, and when given mirrors would reflect back to the other participants images from the non-identical elements of the room or, better still, views out any available windows and doors.  They actively did not want the illusion of being in the same place.

Jim Hollan and Scott Stornetta wrote in “Beyond Being There” that,

…the imitation will never be as good as the real thing…Requiring one medium to imitate the other inevitably pits the strengths of the old medium against the weaknesses of the new.  At the same time, to the extant that the goal is imitation, one will not be led to exploit the distinctive strengths of the new medium.

Not only has Cisco (and Polycom and others) based their telepresence goals on an incorrect premise (“creating the illusion of being in a room together will make people feel they’re in a room together”), but this premise may actively prevent them from developing tools which could make video collaboration better than a face-to-face meeting!

This is like the eye contact argument or the high definition argument.  (We’ll give some tips on that below.)  They’re nice, but they’re not necessary to getting work done.  However, unlike those arguments, illusions of being in the same room can actually distract.  I get asked all the time where I am at.  However, I’m not hiding my home office from view, and it’s natural to ask.  When presented with the illusion, it can be harder to ask.  Much like poor lip sync in video, the perception that something is off can really drive you nuts…

…which then leads us to why the participants in the study would use mirrors to destroy the conference room illusion.  My bookshelves are for all to see.  Therefore, if you are in a room without nearly identical bookshelves, there is no reason to get that feeling of seasick-like unease.

Here’s another fun fact they only just learned:

Having life-size images is not important.

Partly as a result, they’re beginning to look at the desktop user and ways to cram 18 people onto a screen and such.  I can say from personal experience that, by and large, size doesn’t matter (much) in video collaboration.  Granted, if the video is too small then it’s useless.  But it doesn’t need to be life-size, or even larger than a few square inches, to be be effective for communicating via facial expressions and body language.  There is no increased comfort level with using video by having larger sizes.

Let me go over a few tips for a truly great video conferencing experience and the “why” behind them:

1)  Frame your eyes so they are in the upper third of your video.  This way the other participants can see your body language as well as your facial expressions.

2)  Make sure you’re using a system that provides decent lip sync.  Wearing glasses and contacts, growing up with TV that maxed at 480i resolution, driving in the rain, etc., have all made us accustomed to pictures that are less than perfect.  1080p is great for watching movies, but overkill for videoconferencing.  HOWEVER, nothing throws us out of the moment like hearing you finish a long sentence AND THEN seeing your lips move…

3)  Put your camera near the other participants’ windows and the work you’ll be doing.  Studies (and lots of anecdotal evidence besides) have shown that we will infer eye contact when it’s near and below our eyes, and when we can see there is no eye contact, it’s still not disturbing.  Notice that often when two people talk, the listener’s job is to look at the speaker, but the speaker is often not making eye contact.  The speaker will check in, however, so try to keep your eyes and face (and body—see 1 above) in view so they may see your reaction.  Absolute eye contact may not be a big deal, but seeing your eyes is.