With Videoconferencing, Liberty, and Justice For All

One of the big successes in videoconferencing has been its use in judicial courts. The federal courts have long been using the technology for such things as arraignments, bail hearings, post-conviction hearings, and appellate court arguments. Washington and Lee University Law school faculty Aaron Haas notes that in 1972 an Illinois court used videophones to conduct bail hearings, and in 1983, Dade County, Florida, began using videoconferencing in misdemeanor arraignments. In 1995 the Executive Office of Immigration Review (EOIR) began a test program for videoconferencing in immigration courts in three cities.  A year later, the Illegal Immigration Reform and Immigrant Removal Act (1996) made it possible for removal proceedings to be conducted “through videoconference.” 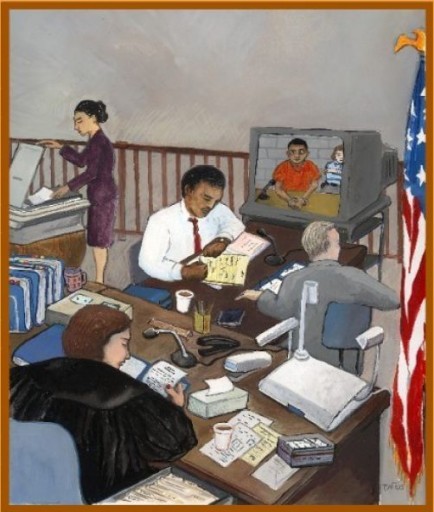 Videoconferencing advocates have been raving about the money, and more importantly, the time saved using videoconferencing. It has particularly come in handy in court arraignments which are the rather cursory first hearings that get the trial process started. (It’s usually a person’s first appearance in court after being arrested so he/she can hear the charges against them.) The problem with arraignments is that they involve bringing the defendant in from unpleasant elsewheres, which turns out to be a complicated, time-consuming process involving coordination among several different agencies (including the courts, the sheriff, the prison facility), plenty of paperwork, prep time, security guards, travel expenses, not to mention housing expenses if they have to wait. Videoconferencing cuts down on the time and resources it takes to securely shuffle bodies back and forth from the prison to the courthouse each day and the headache of figuring out how to squeeze everyone who needs to stay into overcrowded secure holding cells just so a judge can do a five minute sentencing spiel and give the gavel an official knock.  The Legal Intelligencer journalist, Amaris Elliott-Engel, reports that the Curran-Fromhold Correctional Facility in North Philly busses 200-300 inmates down to the courts each business day. At an estimated $79 per person, the Philadelphia Sheriff’s Office reportedly saved $41,415 just in May 2009 by holding 291 videoconference hearings.  Also, in response to a 2010 survey on videoconferencing benefits in the court given by the National Center for State Courts, Pasco and Pinellas County in Florida supported 1,299 videoconferences and saved themselves the trouble of moving 47,777 prisoners.

That’s not the end of the story. It’s convenient for bringing in court experts, who would hopefully rather be doing their jobs at the hospital, lab, or wherever, instead of waiting down at the court to share their expert opinion. It allows doctors to conduct (non-physical) psychiatric evaluations of prisoners from afar reports Stateline staff, John Gramlich.  University of Chicago lecturer Matthew Tokson argues that it’s also an invaluable tool in cases involving foreign witnesses residing outside of the country who would otherwise be unavailable to testify.  Homeland Security Newswire reports that with portable videoconferencing equipment, arraignments can even take place from a hospital, local lockup, or other temporary holding facilities (Video arraignments saving time, money and improves safety for police, courts 2010) .


This isn’t to say that it doesn’t have its detractors. There are still plenty of critics who are troubled by the distancing effect of technology on the judicial process. For example, many are concerned about its impact on immigration hearings where deportation can have life-changing consequences for the defendant. The cool, impersonal nature of videoconferencing is often seen to work against immigrants who may be frightened, uneducated, and have poor English skills. In earlier blogs we talked about the importance of nonverbal cues such as eye contact and facial expressions in building trust and credibility. An experiment by psychology researchers Chris Fullwood, Amy Marie Judd, and Mandy Finn comparing videoconference testimony to face-to-face testimony continues to confirm earlier studies that jury members were less able to emotionally engage with the witness and felt that video-mediated testimony was less believable than face-to-face testimony.  Aaron Haas’s 2006 experimental study of an invented sexual abuse case found that jurors were more likely to find the defendant guilty if the child testified live versus by closed circuit TV. The question is: If important nonverbal cues are interrupted by video-mediation, does that affect a defendant’s ability to present him- or herself? Does that make the hearing less fair?

Another unexpected glitch of videoconference hearings discovered by a 2005 report of Chicago immigration hearings was the inability of a client to consult with his or her attorney in private because there was no private videoconferencing line/room. While this is not a problem with the technology itself, it’s clearly a problem with the implementation of the technology, which is just as important if not more so.

Whether or you welcome videoconferencing, it’s clearly going to be an integral part of justice systems all over the world. It helps streamline costly and inefficient court proceedings and greatly increases the availability of witness testimonies. The important question is whether we will be able to preserve a human face on legal proceedings or will we end up with mass-produced assembly line justice.

Position paper on the emergence of E-everything. 2005. Conference of State Court Administrators.