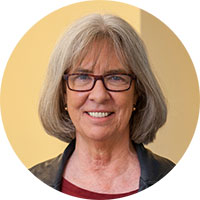 Jeanne Pinder is founder and CEO of ClearHealthCosts, a journalism startup in New York City that is bringing transparency to the health care marketplace by telling people what things cost.

Pinder worked at The New York Times as an editor, reporter and human resources executive for nearly 25 years. She took a buyout in 2009, and a year later won a shark-tank type pitch contest to found ClearHealthCosts.

She speaks fluent Russian and used to live in the Soviet Union, a place almost as opaque as the health care marketplace.