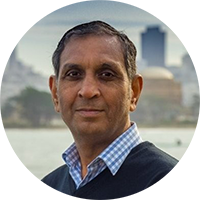 Kuldip’s story is one of immense triumph, resilience and creativity amidst an AML leukemia diagnosis that nearly took his life. He has dedicated himself to empower others to cope with adversity, and transform pain into possibility.

Kuldip founded NeuVisium Foundation an organization that is helping patients while building a bridge to help companies and institutions relook at their research and development strategies by putting a patient first focus. He is also a board member of NeuraMetrix a company that is developing technology for continuous monitoring of CNS diseases such as Parkinson’s and Alzheimer’s.

Mr. Ahluwalia is experienced in helping companies commercialize technologies and implement growth initiatives. His corporate background covers several years with multinationals like GE Medical, Thales and Toshiba Medical where he helped these companies become leaders in their markets. He has also been part of several startup’s including Lumisys, Alara and Step Communications with successful exits.

Kuldip has been involved in several M&A initiatives while at GE, Lumisys, Dexter and Alara. More recently Kuldip served as an advisor at Glimpse – a digital health company that was acquired by Apple.

Mr. Ahluwalia holds a M.S. in BioRadiology / Applied Physics from the University of California, Berkeley, and is an alum of the GE Executive Management Program.