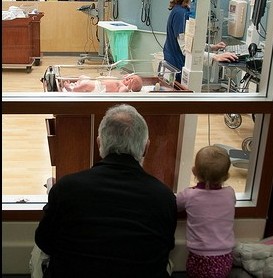 Intermountain Healthcare with the help of VSee telehealth technology is bringing parents of babies in neonatal intensive care units (NICUs) closer to their newborns. Intermountain is redesigning 65 beds at the NICU at the Utah Valley Regional Medical Center with 3 cameras (2 fixed and 1 rotating) that send 24-hour live video feeds of a little one to parents via VSee secure video chat.

You can get a live demo of the Intermountain-VSee NICU setup at this years ATA Meeting and Trade Show May 5-7 in Austin, TX.

This innovative redesign was initiated by Dr. Stephen Minton, neonatologist at Intermountain Healthcare, who started the NICU in 1979.  The problem is parents with babies in the NICU have a very limited window in which they can see their babies. Dr. Minton, for example, sees 65 or so babies in the NICU every day, so understandably, it may take awhile before he can get to a particular baby. At Cedars-Sinai Medical Center in Los Angeles, nurses find that it can sometimes take up to 2-3 days before a recovering mother gets a chance to see her NICU baby, according to this article.

Cedars-Sinai has been doing a similar small pilot program called BabyTime. Using Apple’s FaceTime video chat app, BabyTime aims to reduce the time moms can see a NICU baby down to 2-3 hours and also gives moms a chance to see their babies at least once during a nurse’s 12-hour shift.

With VSee’s secure video chat, Intermountain is able to take this concept one step further and give parents 24-hour video access to their babies. This not only improves parent-physician communications, but as Dr. Minton notes, the main thing is that it helps people “recover being a parent of babies in the NICU (and) be participants in the kinds of care that take place.”

For a live demo of this 24-hour telehealth setup for neonatal care, check out VSee (booth #712) and Intermountain Healthcare (booth #1142) at the ATA Meeting and Trade Show 2013 for telemedicine, mHealth, and eHealth!