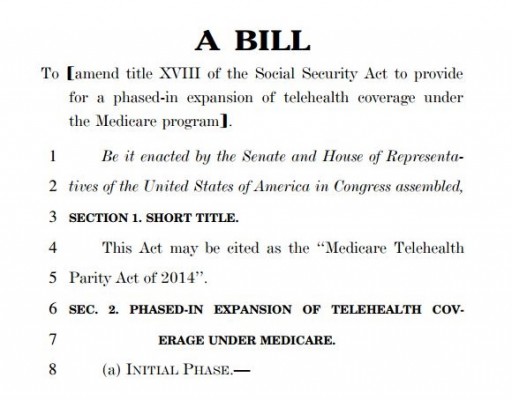 Medicare is getting another chance at expanding its telehealth coverage.  Representative Mike Thompson from California has written a new Medicare Telehealth Parity Act of 2014 which would dramatically expand Medicare reimbursement for many more kinds of telemedicine. Most states tend follow Medicare’s lead when setting their Medicaid policies and determining what private insurers must cover.  So if this new telehealth reimbursement  law succeeds, it will have a ripple effect with positive implications throughout the country.

In 2012, Rep Thompson tried introducing a similar telehealth bill that died in committee. That bill would have made a sweeping revision to the Social Security Act, removing all restrictions on Medicare telemedicine reimbursement at once. Currently, Medicare restricts reimbursement for telemedicine services to a) certain types of services provided to patients in b) qualifying “rural areas” by c) eligible facilities and d) eligible healthcare practitioners. The 2012 bill attempted to eliminate these restrictions and require coverage for all telehealth services in which the corresponding in-person treatment would be covered. Thompson’s new effort is much more conservative.

Now he takes a phased approach, in which telemedicine reimbursement coverage would be gradually expanding over in 3 stages:

The proposal keeps the definition of telemedicine as live face-to-face video conference visits, but expands the definition to include remote patient monitoring technology.  However, it still does not address services provided by telephone or email. This limitation is similar to the telehealth rules set by the American Medical Association (AMA) and Federation of State Medical Boards (FSMB). This could bad news for companies like Teladoc and Zipnosis, which focus on care by phone and email.

How Likely is Medicare Telehealth Expansion?

Will this bill pass? True, Thompson found a co-author from across the aisle, so he has a little bipartisan support. And they have the backing of industry groups like the Alliance for Connected Care. Still, Congress has defeated reform multiple times. This latest proposal offers the same reforms as in 2012, only on a delayed schedule. It’s hard to see why legislators would be persuaded by a longer timeline.

Besides, the government is seriously divided. Any expansion of Medicare reimbursement, even one that saves money in the long run, means a change in the federal budget. Right now, Congress is incapable of agreeing on any changes to Medicare spending, as we saw with the budget stalemate over the last few years.

So while we welcome Thompson’s efforts and encourage his efforts in fighting for telehealth reform, we’re not holding our breath on this latest bill becoming law.