TokBox Picked Up By Telefónica – A Sad Day For Its People 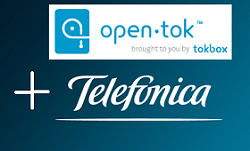 Last week, a struggling TokBox announced its acquisition by Telefónica Digital for an undisclosed amount.  This is a pretty sad news for TokBox and its investors. They raised a lot of money, and given this is a semi-fire sale, its investors lost money.  Also, its people, who have worked long and hard for many years, came out with nothing.

TokBox had great people, but its fatal mistake was listening to the hype of Flash and not paying attention to the hard limits of human factors for visual communication.  AirTime, another hot startup who raised tons of money backed by A-list investors such as Sequoia Capital, is also struggling to gain a foothold in the video communications market, since it also didn’t pay attention to the human factor requirements of video chat.

Apparently, TokBox wowed Telefónica with its imminent HTML5  / WebRTC video in the browser technology.  With Telefónica betting on the growth and ubiquity of HTML5, it seemed like a match made in heaven.

Telefónica plans to incorporate the TokBox video APIs (a.k.a. OpenTok) into its BlueVia communication platform which has been missing a comprehensive video solution.  In return TokBox potentially has access to Telefónica’s 300 million customers.

Ian Small will continue to lead TokBox as CEO, while Carlos Domingo, Telefónica Digital’s Director of Product Development & Innovation, will take a seat on the TokBox Board of Directors and become Chairman of the company.

Telefónica Digital is the aggressive “entrepreneurial startup” arm of the traditional Spanish telecomm behemoth Telefónica. It was formed last September 2011 to woo a market hooked on free alternatives such as Skype, WhatsApp, iPhone etc.to the detriment of network operators like Telefónica. By consolidating its business and digital assets and focusing on cloud and digital solutions, Telefónica hopes to remake itself as an innovative and dynamic company.

Telefónica Digital CEO Matthew Keys says, “We are clear about what we are good at and it’s not hardware.”  He adds, “We also don’t want to be the next Facebook or Google. That game is over. We will partner the relevant people and compete with them as well. We don’t believe you can own the ecosystem from end to end, which is a very different approach.”