Videoconferencing All Around Us

Posted May 4, 2011 / By anne / In Communications, miscellaneous, Science of Video Collaboration

Maybe it’s the $4 per gallon gas prices or perhaps people are tired of traveling 6-8 hours for one 45-minute meeting.  Maybe it’s the advances in networking technologies and services or the pricking of our environmental consciences.  Maybe it’s because the world really is a global village today or because we’re in the middle of a communication revolution.  Whatever the reason, videoconferencing is gaining momentum in all kinds of fields, not just your typical corporate business.

Despite concerns about the fairness and validity of using videoconferencing in judicial proceedings, videoconferencing is being widely used in courts in many countries today including Australia, Slovenia, Malaysia, India, Hungary, England, and France.  In the U.S., it has been used since before the Criminal Justice Act (1988) which allowed evidence to be given over a live video link.  In fact, researchers Fullwood, Judd, and Finn explain that in cases of sexual assault involving children, the law requires children’s testimonies to be given via a video link.

Besides witness testimonies, videoconferencing may also be used for arraignments, court reporting, translation services from outside the county or state, legal consultations, etc.  It is most commonly used for arraignments, which are rather perfunctory proceedings that would otherwise require more time and money in order to transport and securely hold the defendants.

“Position Paper On The Emergence of E-Everything” takes a more thorough look at all the various technologies being utilized by the judicial system.

Zundel’s history of telemedicine shows that it has actually been around for quite awhile.  In 1964, Nebraska Psychiatric Institute and Norfolk State Hospital established the first interactive video link.  In 1967 Massachusetts General Hospital and Boston Logan Airport clinic established a working system that allowed transferring data, remote diagnosis by interactive television.  But it’s really with the improved telecommunication technology in the last 15 years that it has become a more accepted medical practice.  The idea is to be able to provide more access to medical care for those in poor, underserved, or remote areas.

While a simple phone call may be good enough in some cases, many times interactive video links are required to provide effective medical care, such as working with children, identifying schizophrenia, or deciding on proper care in medical emergencies.

Milton’s initial work with videoconferencing was with university level distance learning courses, but the possibilities in education are really endless.  Here is an extremely limited list of some of the things I’ve seen or read about:

For those of you into sports, both the NBA and NFL use broadcast- quality videoconferencing to bring you those live interviews of coaches and players during the NBA drafts and NFL training camps.

In 2006, President Obama made history when he delivered the first live videoconference to hundred of thousands of viewers and allowed them to submit their questions.  Of course, we get regular press reports of video conferences with other world leaders, like a recent chat with Afghan President Hamid Karzai.

Keeping in Touch With Family 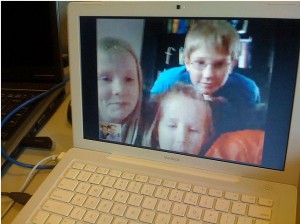 For people who have immigrated to a new country or moved to a different state, videoconferencing has been a great way for them to keep in contact with family in a more personal way.  Studies by Kirk et al. and Ames et al. have found that for many, it’s especially meaningful in helping to keep grandparents connected to grandchildren.  With children, videoconferencing works better than phone since young children aren’t so good at holding phone conversations.  They often ignore phone cues and talk to you like you can see them, and honestly, their vocabulary and attention span is just plain limited at that age.