WebRTC (Real-Time Communication) has been getting a bit of press between meetings.io getting acquired by Jive (specifically chosen for its WebRTC technology) and TokBox announcing its new Opentok WebRTC for iOS SDK.

What’s the big deal with WebRTC?

WebRTC is exciting because it allows real-time audio/video to be embedded right in a web browser without any download, just like Flash – only its video performance is way better than Flash.  WebRTC is the combination of two great companies that Google acquired – Global IP Sound (for voice) and On2 (for video).

However, even WebRTC analyst and enthusiast Tsahi Levent-Levi thinks its a bit early for companies to be throwing all their eggs into the WebRTC basket.  Currently WebRTC is only fully supported by Google Chrome and Opera (although Firefox is on board with the WebRTC movement, and even Microsoft may be caving in some to the peer pressure).  It also still doesn’t have the performance of client-based video conferencing software like VSee 🙂  Nevertheless, with popular social platforms such as Jive and Facebook being dependent on the web, we can definitely expect to see WebRTC making bigger splashes in the collaboration market soon. 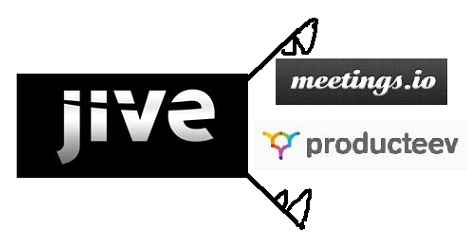 Meetings.io is a three person act based in San Francisco which put out an easy video meeting and screen share solution based on WebRTC.  Meetings.io started out using Flash, but then moved over to take advantage of WebRTC (which Google Hangouts doesn’t fully use because of poor performance).  Their hard work paid off because meetings.io along with Producteev was recently acquired by Jive, a well-known web-based social business platform, for a grand total of 7.6 million plus 460,000 in Jive stock.

With these 2 new additions it’s clear that Jive making aggressive moves to stay in the enterprise collaboration game.  With its meetings.io acquisition, it can now add simple real time voice and video to enhance its collaboration capabilities and play with the big boys. Constellation Research principal analyst Alan Lepofsky notes that “IBM (Connections and Sametime), Microsoft (SharePoint and Lync), Citrix (Podio and GotoMeeting), Cisco (WebEx Meetings and Social) and Salesforce (Chatter) already offer social task management and real-time communications as part of their offerings.”  Techcrunch’s Alex Williams sees Jive as being in direct competition with Salesforce.com for this space.

TokBox (OpenTok) has also been moving away from its Flash origins and working to switch over to WebRTC for awhile now.  Recently it was acquired by Telefonica for its API (which is still Flash-based).  Its newly announced webRTC SDK for iOS is a big leap forward in allowing the integration of high quality live video into applications for iOS.

So what does this mean for VSee?  If you like the WebRTC performance, please do a side-by-side benchmark of VSee – you will be pleasantly surprised 🙂  On top of better network performance, VSee has fast screen share with annotation, and provides end-to-end 256-bit AES encryption.