A Review of Telemedicine Video Conferencing Solutions at ATA 2014 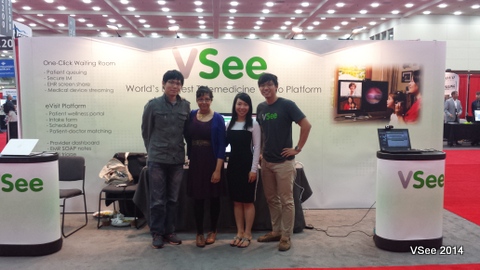 Thanks to everyone who came out to see VSee telemedicine video conferencing solutions at this year’s ATA 2014 expo.  We had a great exhibition with an overwhelming show of interest in our eVisit products for online video doctor visits.  Our only disappointment was that our favorite video conferencing competitor, Vidyo (which also provides great quality video), decided to change booths at the last minute from their original booth space #2414 right next to ours to #3413 way out yonder on the ATA show floor wilderness.  We were looking forward to our usual friendly rivalry at this year’s ATA exhibition, but I guess they were feeling shy – oh well, maybe next year 🙂

Other than Vidyo, the usual suspects were also out on the ATA show floor strutting their stuff — Polycom, Cisco (Tandberg), LifeSize.  Since we get quite a few questions about what makes VSee telemedicine video different from these other guys, I thought it might be a good time to give a bird’s eye view of the differences.

Polycom, Cisco, and LifeSize provide legacy video conferencing systems (a.k.a. traditional video conferencing systems).  This requires purchasing expensive hardware.  It also requires dedicated infrastructure which is complicated to set up and expensive to maintain.  Both of these make expanding telemedicine endpoints pricey and difficult.  The good thing about such systems is because video is running on the system’s dedicated hardware you can expect standardized video and audio quality.

Vidyo is a little different from Polycom, Cisco, and LifeSize in that it’s a software solution, so it’s cheaper because you’re not required to purchase as much fancy hardware equipment.  However, it still requires dedicated infrastructure which translates into expensive servers to maintain and extra servers to purchase when you want to scale up.

VSee video platform is a very different beast from these legacy video conferencing systems.  Like Vidyo, it is a software-based video platform, but that’s where the similarities end.  Unlike Vidyo (and everyone else) VSee uses a peer-to-peer structure which eliminates the need for a dedicated infrastructure.  Instead, of routing video streams through expensive dedicated servers and network, VSee uses a directory server to look up the endpoints which want to talk to each other. Video is then streamed directly from endpoint to endpoint over a regular network, so all you need is a computer with a webcam, mic, and Internet connection running the VSee app.

This and VSee’s low bandwidth consumption makes it very simple for doctors to connect to patients virtually anywhere in the world, especially in remote and rural areas. The downside of this simplicity is less predictability with video and audio quality since you may not know what kind of network or computer endpoint is being used. Also see this more comprehensive list of features that make VSee video chat ideal for telemedicine.

So in a nutshell:

If you have other questions, feel free to let us know!