Telework: An Antidote To Micromanaging 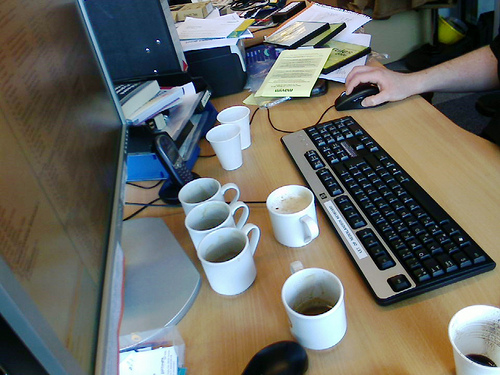 It turns out that teleworkers are less prone to misconduct than office-bound workers.  It’s uncertain whether this is because

I’d like to believe in that last point, as BNN’s Evil HR Lady suggests: People who are treated as capable, responsible adults will act as such whereas people who are treated like lazy, untrustworthy bums are also going to live up to those expectations.  Doesn’t the fact that there are universities that trust their students to proctor their own exams show proof of this?  On the other hand, doesn’t the frustration that we’ve all suffered at the hands of some micromanager indicate that this may not be the most effective way of making people productive?

Richard L. Porterfield’s article on “The Perils of Micromanaging” concedes that there are cases when micromanaging works.  For example, it’s great for assembly line manufacturing jobs where human bodies essentially function as mindless machines.  However, for the most part he notes: “Managers who insist on being involved in every detail demoralize their employees, add unnecessary stress to their own lives, and endanger their organization’s long-term success.”

I suppose that’s why teleworking is so repulsive to many managers.  It drastically reduces their ability to control every aspect of their employee’s work.  Remote management forces a change in managing styles since managers don’t usually have the chance to directly observe workers or to speak face-to-face.  Instead, it requires, setting clear objectives, criteria, deliverables, and deadlines, and most importantly developing trust.  It forces managers more into the role of monitoring, motivating, guiding, and giving feedback whereas in  micromanaging they are having to make sure each person does his or her job the way they would do it.

In “The Consequences of Micromanaging,” Kenneth E. Fracaro includes 5 signs and effects to watch out for:

Maybe these are also reasons why teleworkers are often cited as being more productive.  Gallup estimates that the difference between a company of 30% engaged employees and 70% employees can be the difference between $300 billion dollars in productivity and 3.9 times in profit growth (i.e. Earnings Per Share growth rate).  A global study conducted by the Future Worker finds that $105 billion is lost each year due to poor people management and hiring.

To be fair to micromanaging managers, many don’t even realize the grief they are causing their workers and feel that they are dealing with things in the best way that they can.  Considering all the negative effects and bad feelings it causes, perhaps it’s time to consider walking in the ways of remote managing.