The Next Big Thing In Videoconferencing 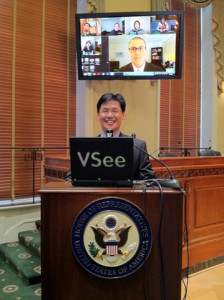 Is Vidyo really the next big thing in video conferencing?  It has been attracting attention for being the new Cisco and Polycom of the video conferencing world. This is because Vidyo dirt cheap compared with traditional videoconference leaders Cisco, Polycom, Avaya/Radvision (at about a third of the typical price tag).  However, if you want to talk about a truly different way of doing video conferencing, then you have to take a good look at VSee.

VSee thrives on the concept of simplicity and making teamwork productive.  It eliminates the need for backend setup and maintenance, and it’s one-click design makes it easy to get work done as a team.  What other teamwork tool makes it possible to see your whole team or  share an application or send file in a single click?

In fact, LiveScience in partnership with the National Science Foundation (NSF) recently featured this Behind the Scenes article on VSee’s security and simplicity.  Here’s a brief excerpt on how it even got the thumbs up from Congress:

Such security and simplicity factors were key for a recent decision by the U.S. House of Representatives to adopt the technology for use behind their firewall. Currently, only a few dozen Congressional district offices have video conferencing hardware, due to system costs, complexity, and security holes. With the VSee platform, it is now possible to outfit all the remote district offices essentially for free, potentially saving millions of dollars.

Room-based video conferencing and beautiful telepresence setups are nothing new.  In fact, according to both Raymond James and Frost & Sullivan researchers, they are dying markets in video conferencing.  Raymond James Communications Technology Analyst Tavis McCourt observes that there has been a noticeable lack of growth in Cisco’s collaboration and telepresence products in recent years, and that competitors Polycom and LifeSize have been suffering as well.  These are due to:

a rapid change in industry growth trends. We believe the most likely culprits are a sudden weakening in Europe, longer sales cycles related to new cloud-based deployment options and desktop video options, and a likely maturing of the room-based endpoint market in the developed world.

The videoconferencing market is fast approaching an inflection point driven by high quality and low-cost solutions combined with an escalating need for rich collaboration…. The imminent shift to software-centric solutions and the impact of consumerization will open up new growth opportunities while overturning traditional business models.

What is needed now is a lightweight means of getting work done together quickly and socially, especially as teams become more spread out across the globe and workers become more mobile and likely to work from home or anywhere.  If this is what you’ve been looking for, VSee is ready to go and literally free for any person or business to use.

You might also be interested to read our article here: VSee – Free Alternative to Vidyo Telepresence Business Video Conference – Comparison