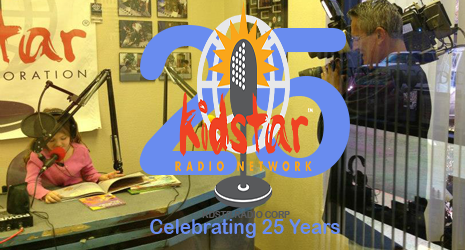 VSee is excited to be a partner of the KidStar Radio program, an all kid-run radio station which has been empowering and changing children’s lives for the past 27 years. VSee’s simple design and low-bandwidth video conference capabilities has fast become a favorite tool of founder and president Perry Damone and his staff. VSee makes it super easy for them to meet online and to share documents and applications with students and mentors in a way that Skype and Google Hangouts doesn’t quite do.

As Damone explains, much of the work Kidstar has done has been hands on with the children and mentors in the local school or community centers. As the program spreads, one of the challenges is how to give kids all over the world that same face to face experience. Damone admits, “It’s going to be a tough learning curve because hands-on has been the model.” That’s where he sees VSee making a difference. “We need to teach to and experience kids as much as possible,” he explains, “and VSee can’t be beat for ease of use and the ability to share documents and screens in a hands on way. It lets me demo how to do something right on the screen or I can watch them as they do it. With VSee, we can also get into places where bandwidth is an issue and that’s huge for me. Some of the kids, just don’t have the high end Internet.”

For KidStar chief of operations Bruce Solsten, security was also a big consideration. When he was trying out Google Hangouts, he had one situation where 2 uninvited, random guests from India came walking into what he thought was a private call in Hangouts.  Solsten says that while he really likes Google Hangouts’ features, “our concern is exposing kids to people we can’t screen and Hangouts just didn’t fit with our needs.”  He adds, “We also use Skype a lot, but with Skype, the digital footprint is huge. When I saw that the VSee platform is nearly 50% of Skype, it really got my attention because I’m always having trouble with multiple party calls. VSee isn’t always perfect, either, but it’s 100% better.”

The KidStar program started when Damone was invited to talk to a class of 6th graders at Shumway Elementary School in Chandler, Arizona about his job as a radio broadcaster.  They were so enthusiastic that he thought why not teach the kids how to run their own radio station and broadcast their own radio shows? Since then, it has grown into a powerful program for social change that’s spread across the U.S. and is even going overseas. KidStar not only trains kids on the in’s and out’s of how to “do” quality radio, it gives them a means to explore their dreams, achieve their goals, and to interact with the world in meaningful ways. From the 7-year-old with her own reading show to the tweenage chef interviewing the legendary Paul Prudhomme to the at-risk gangbanger exploring the life of a Marine (and eventually joining the Marines), KidStar has proven to be an important way for kids of all backgrounds and levels to engage with world around them and to take ownership of their lives. To see what the kids are doing for yourself, check out their shows, which are broadcasting here.