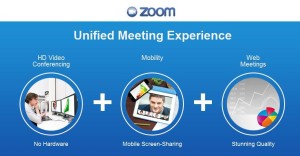 Initially a free consumer offering, Zoom received a great review from Walt Mossberg’s AllThingsD column for its clear 15-person group video and screen share.  Now Zoom is limiting free video to 1-on-1 calls as it focuses on entering the enterprise space and the education sector.

David Maldow from the Telepresence Options Human Productivity Lab recently reviewed the new features and gives Zoom a hearty thumbs up. Some of the finer points David points out include multi-screen desktops (so video can be displayed on one screen while screen share content is displayed on another panel) and unlimited video recording.

However, the biggest selling point for Zoom is its full featured mobile support.  It also can accommodate 40 participants in a video conference unlike WebEx Meetings which supports 9 or ooVoo which supports 12.

Vidyo and Blue Jeans out of the picture?

Zoom architecture still uses servers in the cloud to to stream video, like Vidyo and Blue Jeans – two startups that have raised tons of money. (VSee is peer-to-peer and only uses a server for http tunneling if peer-to-peer connection is not possible).

However, Zoom also has significantly higher video performance than either Vidyo or Blue Jeans. It is unclear how these two earlier hot startups will compete with Zoom.  A great advantage of Zoom is that it has a simple pricing — $9.99 for businesses and enterprises, $0.99 for education — unlike Vidyo’s complicated pricing model.

How does VSee compare with Zoom?

A key unknown is how much users care about security.  Zoom streams video to its servers, which have full access to your conversations.  VSee, on the other hand, uses end-to-end encryption where your conversation is always private, confidential, and off-the-record.

Another unknown is how simple the user design needs to be.  VSee has a simpler user experience compared to Zoom for creative team work, telemedicine, and telehealth. How much will people care about a few extra clicks?

As for Zoom’s education focus, VSee not only offers free group video for anyone, it also gives all students free screen sharing as well.  Why pay for Zoom if you can get it free with VSee?

Please give VSee a try and tell us what you think! 🙂