We have tested a wide variety of cameras with VSee, and pretty much anything that works with Windows DirectShow will give you a satisfactory experience, but a few webcams really stand out for video calling with their superior image quality due to superior optics and optical auto-focus.

1.  For general usage, we recommend the Logitech HD Pro Webcam C920.  It has the all-

important mechanical auto-focus and runs $75-$100. It can also work for telemedicine, like this cost-effective VSee-Intermountain tele-NICU setup using 3 Logitech C920 webcams. Ubergizmo has an excellent review of the C920 with pictures comparing the video quality of several other popular Logitech webcams –  Pro 9000, C910, and C920.

2. Logitech C925e works great for businesses and is affordably priced. At $99.99, get HD quality videos in any setting.
The RightLight™ 2 Technology intelligently adjusts to improve visual quality in low-light and backlit venues. It also has a privacy shutter that allows you to close the lens when you are not on the video call (or don’t want to be).

3. If you’re on a tighter budget, Logitech B525 is a good quality camera at $60. It has a 360-swivel and fold-and-go design. It still has the clip that can attach to your laptop, and can be easily tucked away when not in use.

4. For a little bit more money, the Logitech Webcam C930e (~$130) for businesses is an excellent webcam that gives you a really spectacular, smooth HD video experience. It’s a nice choice for telemedicine with its wide 90-degree diagonal field of view and Pan-Tilt-Zoom. (However, the C920 can be adequate, too. ) 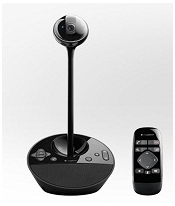 5.  The Logitech BCC950 Conference Cam is the updated version of the now discontinued Logitech QuickCam Orbit AF. It also has a 9″ stick mount for eye-level video conferencing.

It’s designed for group conferencing and has built-in omni-directional speaker phones, remote control, and 8 feet of cord length compared with the Orbit’s 6 feet. It makes nice (inexpensive) choice for room video conference calls where it can be put on the table and moved around to bring the camera closer to people’s faces.

I’ve seen this camera for as low as $188, although it more typically runs around $250. Tom Keating at TMCnet did a thorough review of the BCC950. Please note VSee does not support remote PTZ control for the BCC950.

(See below for supported PTZ cameras or contact sales if you have questions.)

6. Microsoft is also in the camera business. While we’ve really liked the Microsoft LifeCam Cinema in the past, we’ve found over time that its video performance has been inconsistent and its driver bloated. It also claims to put out HD video at 30 fps although I couldn’t get it to go over 15 fps at 720p. However, even at that setting the video was stunning.

NOTE: If you’re wondering about the QuickCam Pro for Notebooks, (also sold as the Webcam C905) previously mentioned in this post, it is now a discontinued product. Your best bets are now are C925e, B525 or C930e depending on your functionality needs and price sensitivity. 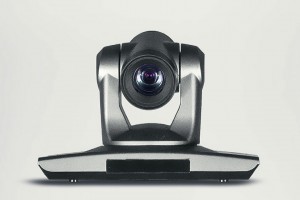 Finally, if you are building out telemedicine exam rooms or a telepresence conference room and cost is no object, you should look into one of these cameras:

The first two units will start around $1,800 at least. At this price point you get really high quality optics and mechanical zoom as well as pan-tilt.

What’s nice about the Minrray, Logitech and PTZOptics cameras is that they are  USB 3.0 devices which makes for a super simple plug-and-play set up.

Logitech also offers a complete solution with the Logitech GROUP which already includes a speakerphone in a very sleek design.

**Only the VSee customized version of the Minrray PTZ works with VSee. If you get a non-customized Minrray camera, you may experience issues.

For more information about VSee telepresence system,  to see VSee’s remote PTZ feature in action, or to purchase a customized Minrray for VSee, please contact sales.

(video comparison of Logitech PTZ Pro and Pro 2 below)