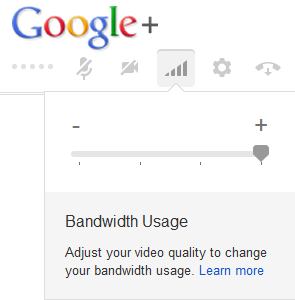 Google+ Hangouts is trying to be more bandwidth-friendly with its new bandwidth slider and audio-only features. This is welcome news for those on 3G, Wifi, DSL, or otherwise slow Internet who have had a hard time jumping into a Hangout. In particular, bandwidth limitations can be a problem for people living in rural areas or traveling to other countries.

Apparently this is a much needed feature, because according to this Mashable article by Rob Lammle, Google Hangouts is the worst offender when it comes to video chat services that eat up your bandwidth.  It uses a whopping  150 MB  for 10 minutes, compared with Microsoft Skype and Apple Facetime’s 30 MB.  However none of these can even come close to the mileage you can get out of VSee’s low bandwidth video chat.  VSee was specially designed to work over slow Internet and uses half the bandwidth of Skype for the same video quality. (You can check out the numbers and video comparisons here…or better yet, do your own tests!)

The Google Hangouts bandwidth slider is really a simple work around for its high bandwidth use issues. It gives users some ability to control their video resolution so they can still participate in a Google Hangout at a lower video quality or even no video.  It’s a common feature in many other group video chat services (including ooVoo, and Vidyo ). Although, other video chat services, like Skype, may automatically adjust video resolution to the available bandwidth without allowing any input from the user.  VSee uses dynamic video quality adjustment without any user intervention; however, the user can force a particular setting such as HD, etc.

Of course, you can completely sidestep the whole Google Hangout bandwidth issue by using VSee. VSee works even in difficult-to-connect places such as Syria, Morocco and has been used to connect doctors to patients in rural Haiti, the African rainforest, and the jungles of Southeast Asia. Why settle for poor video or audio-only in Google Hangouts when VSee can give you great video and a better user experience no matter where you are.