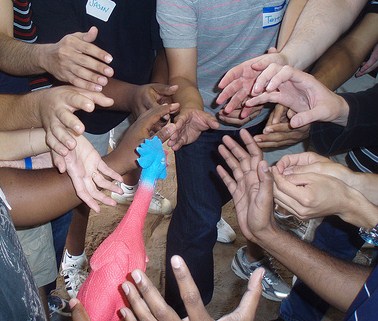 In a study of virtual teams, Stanford management science professor Pamela Hinds found that 6 months after virtual team members participated in an intense week-long team building retreat there was zero correlation to their ability to work together.  Hinds believes that in order to increase a group’s relational coordination or ability to problem-solve through mutual respect and open communication, members need to “know-who” each other are in their work contexts.  Bringing people who don’t usually see each other to do team building exercises in a neutral hotel doesn’t help because Hinds points out, “the truth is we don’t work in neutral territory.”

She emphasizes, “Learning to work together is learning how people work, not just what kind of beer do you like,” even though she adds, “that’s useful information.”

Why Is Learning How People Work Vital To Virtual Team-building?
Hinds and Cramton’s research on virtual development teams in 2 to 3 locations found that site visits changed the way team members worked together by significantly raising people’s level of comfort in working with each other.  Site visitors received the greatest benefits from a visit because they gained the most insight into how their host counterparts worked.  They learned not only about their team members’ personalities and how they interacted socially with others, they also learned tacit knowledge like:

At a site visit they were able to interact closely with coworkers throughout the day instead of only seeing them during formal meetings (videoconference or otherwise) or communicating through impersonal e-mail messages.  One site visitor realized during a visit that one of his virtual coworkers who had always been rude and abrasive towards him was not being specifically unkind to him, but that that was the coworker’s personality.  In fact, that coworker was even more rude and gruff with his on-site coworkers.

Hinds characterizes successful site visits as ones in which team members developed “mutual respect and willingness to work through differences” that wasn’t there before.

So What About People Working From Home?
Obviously, most people are not going to do a site visit to a coworker’s home, although surprisingly, visiting a remote team member to get work done isn’t unheard of.  More commonly reported is managers visiting homes to touch base with their teleworkers.  But these short, in-between visits isn’t the kind of thing Hinds is talking about.  As management professor Judith Holton corroborates “personal familiarity, intimacy, and trust” is only created through frequent and meaningful interaction.  In Hinds and Cramton’s research, besides lunches and hallway talk, a main thing that happened in site visits was the continuous interaction that came from literally sitting side-by-side.  What’s cool about VSee, as opposed to traditional  videoconferencing, is that it replicates this working “side-by-side,” making it easy for you to frequently interact with coworkers in meaningful ways throughout the day thus facilitating your getting to “know-who” they are.

Other Remote Relationship-Builders
With VSee I’m also sometimes privileged with glimpses into people’s home lives which make them more human and approachable.  The power of visuals is such that I would even recommend sometimes purposefully using props to help establish a visual sense of who you are.  Also, since there are no visual cues to let others when a teleworkers are available, it’s good to encourage people to share their work habits and schedules so people know that someone has kids to pick up after school or a dog to walk in the morning.