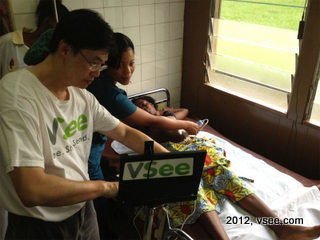 VSee started as a simple desire to create a group video chat app that 1) didn’t drop calls and freeze video like Skype, that 2) protected privacy by not going through servers like Google Hangouts, and that 3) made collaboration extremely easy. The result was a simple low bandwidth video conference and fast screen share tool initially used only in niche circles like NASA and the Navy SEALs.

But the story doesn’t end there. It turns out VSee is also a favorite tool for social change and doing business with the billions represented by the BoP (Base of the Pyramid) model. It’s free group video chat uses a fraction of the bandwidth of Skype, Google Hangouts, Vidyo, and other video calling applications to get the same video quality and is amazingly easy for anyone to use. VSee has been especially appealing to those into global health care

“As soon as we launched the company, we noticed that we had a lot of activity in developing countries,” [Milton, VSee CEO] says. “Everybody there wants to use Skype, but because their bandwidth is not that great, they’re almost forced to use something else.”

Moreover, he noticed that many of VSee’s users were in the health care field. “Medical areas just started using this more and more, so we’ve been devoting more and more resources to telemedicine, combining VSee with some medical peripherals. We have projects in Nigeria, Kenya, Rwanda, Haiti, Egypt, Afghanistan, Pakistan, and Nepal – right now, half of our company revenue comes from telemedicine. And it’s pretty much been through word of mouth.”

VSee is even more practical now with the release of its 5-way video chat and screen share app for iPad (also the first FDA-registered and HIPAA-compliant video chat telehealth tool for iPad). With the price of medical devices dropping, holding a VSee telehealth consultation can be as inexpensive as hooking up a $400 ultrasound probe to a mobile device.

Read the entire Next Billion article here – how VSee aims to be the medical video chat for the world.