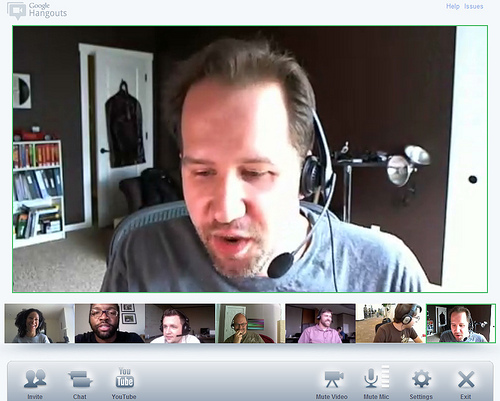 Summary:  A guest contributer’s review of Google+ Hangouts with information on the technology behind it.

Our guest contributor, Rich Griffin, has been testing out Google+ Hangouts and this is what he had to say about it:

The participants and myself all had strong Windows-based PCs and more-than-adequate Internet throughput.

The videoconference began well enough; with all participants’ videos displayed and good audio mixing. Adding participants is very straightforward, allowing for easy ad-hoc meetings.  But it still has some bugs to work out.

Google+ Hangouts is a really just a snapshot of a system still in transition.  It’s current framework uses Vidyo’s Adaptive Video Layering Architecture–H.264-SVC (proprietary video/audio compression technology)  within the Gmail Video Chat plugins available for over a year now. According to Justin Uberti (Tech Lead, Google Real Time Communications) those plugins represent some of the core technology from Google’s acquisition of Marratech along with Google’s slightly non-XEP compliant version of Jingle.  (A fun note on Jingle: VSee’s CEO, Milton Chen helped write the video part of it! ) Hangouts adds XEP-0045 (multi-user conference) to their implementation of ICE and STUN–which are the techniques used to enable peer-to-peer calls (It’s used by Skype, VSee, and all other P2P calling companies). All of which sounds really good on paper but when in use resulted in a very poor experience with lots of stuttery video and massive memory leaks.  One of my participants noticed that Hangouts was consuming close to 15GB of his 16GB RAM before it crashed – and un-gently so at that.

According to Justin, the plan for Hangouts is to transition from Vidyo’s video codec to Google’s recently acquired On2, VP8 video and GIPS iSAC audio along with the GIPS Videoconference Engine framework. This is all part of Google’s WebRTC initiative – again, sounds good on paper, but the value of any technology is in it’s implementation and ability to contribute value to people collaborating with one another.

I am always glad to try out new visual collaboration systems. Competition is good. It’s also good to note that my video conferencing system of choice, VSee, has maintained its top ranking. To be fair, I include Vidyo Desktop and Nefsis roughly the same in terms of lip-sync maintenance, smooth-motion video, low bit rate and systems resources requirements.”


A codec is software that is used to compress video or audio data.  Various video codecs exist and are in use, though some do a better job than others. (The ones mentioned in this piece that are used by Google all perform at similar efficiencies.)  Some codecs are open source and are available for anyone to use; some are owned and need to be paid for to be used.  Vidyo owns an H.264-SVC codec that Google currently pays to use in its videochatting services.  On2’s VP8, GIPS iSAC, GIPS Videoconference Engine refer to codecs and technology that Google acquired and then recently made open source as part of their WebRTC project (RTC meaning Real-Time Communications).  By making this technology open source, Google is encouraging developers to build real-time voice and video applications, like videochatting, for the web browser.

XMPP (Extensible Messaging and Presence Protocol) is a library of formats and rules used for writing real-time communication applications. Originally, it was only for Instant Messaging and knowing when people are “on” or “off”, but is now also used for other kinds of messaging (e.g. voice).  There are many other such protocols, but XMPP is special in that it is open source and was designed to be extended or built upon.  Jingle is an XMPP extension.  XEP-0045 is also an XMPP extension.

Lifehacker’s rave review of Google+ Hangouts:  his video gives you a good idea of how Google+ Hangout works if you haven’t tried it yourself already.