Telemedicine has passed the tipping point. Two recent surveys of healthcare providers show that telemedicine, if not quite a mature industry, has at least achieved mainstream acceptance.

In a survey by the Academy of Integrative Health & Medicine (AIHM), two-thirds of respondents said that they “are either using telemedicine to provide services now, or planning to in the next few years.” That’s an impressive number considering the barriers to reimbursement that providers have to overcome. They also suggested that telemedicine is most appropriate for follow-up visits. This falls in line with the American Medical Association and Federation of State Medical Board’s more cautious guidelines regarding telemedicine policy. 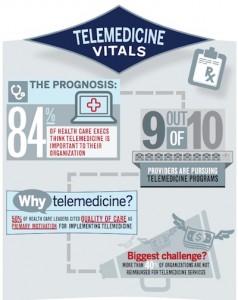 Meanwhile, law firm Foley & Lardner published a survey of provider organizations. They found that a whopping 84 percent of executives think of telemedicine as either “important” or “very important” to their organization. That represents a massive improvement on telemedicine’s acceptance over the last few years. Almost two thirds (64 percent) offer remote monitoring, while majorities provide store-and-forward services as well as “some kind of real-time interaction technology such as video visits.”

It’s interesting that the executives surveyed did not see telemedicine as a tool for higher profits or to make their organizations more competitive. Rather, “the leading response was that executives were primarily motivated by the idea of improving quality of care for patients (50 percent).”

These numbers are very positive for VSee’s future. Virtual doctor visits will continue to rise in popularity as people realize that they can save time and money. If the technology can find this much acceptance in spite of all the regulatory hurdles, just imagine how popular telemedicine will become once doctors are fully reimbursed for their services! Clearly telemedicine is an idea whose time has come.