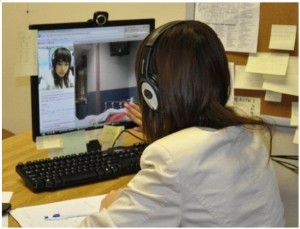 The young Burmese mother had given up trying to communicate with doctors and nurses through the hospital’s occasional face-to-face interpreter.  She had been in the hospital with her sick 18-month-old baby for several days and was overwhelmed with frustration at being unable to express her concerns and to understand what was happening.  Fortunately, her story ends happily when the nurse interpreter that had been provided over a VSee video conference during previous visits happened to be in the hospital.  Unfortunately, a large number of  patients with limited English abilities in the U.S. are unable to get the medical care they need because of the lack of skilled medical interpreters.

But it doesn’t have to be that way.  In Allen County, Indiana, a coalition of  health organizations spearheaded by St. Joseph Community Health Foundation put into place a highly successful, low-cost medical interpretation program by using VSee secure video calling technology to provide Internet video interpretation services.  The initial 12-month budget was only $130,000 and currently employs two full-time and three part-time interpreters.  Ellie Bogue in the Fort Wayne News-Sentinel reported:

Melanie Koch, clinical director of nursing at the health department, says the system has been easy for staff to learn and has lowered costs, allowed for a better flow of patients, and made more efficient use of a physician’s time. She says that although Catholic Charities has made Burmese interpreters available, the interpreters were frequently out in the field, and there would be a wait for the patient and doctor. Since VSee’s debut in December, use has averaged between 10 and 20 appointments daily, and on occasion the system has handled as many as 40 patients a day.

Before the program began, Allen County health providers had tried using face-to-face interpreters to facilitate communication with its flood of Burmese refugees and immigrants, but found the method ineffective to the point where they were having to turn away Burmese-speaking patients because of the inability to communicate with them.

The Foundation has won recognition from the Indiana Perinatal Network (IPN) for the video interpretation program’s effectiveness in providing care to mothers who have recently given birth and was awarded with the Spirit of Service Communication Award. The interpreter program has also received the Health Information Technology Award from the Association of Clinicians for the Underserved.